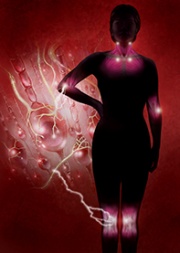 By Bianca Nogrady
A reduction in skin nerve-fibre density may be associated with higher pain intensity and disability due to pain in patients with fibromyalgia, research suggests.

Writing in the Annals of Neurology, researchers presented the results of a German study involving 117 women with fibromyalgia syndrome (FMS) who underwent neurological and neurophysiological testing, questionnaire assessment of symptoms and small-fibre tests, including skin punch biopsy, corneal confocal microscopy and sensory testing. Their findings were compared with those from women with major depressive disorder and chronic widespread pain, and from healthy women.

This analysis found that 63% of women with fibromyalgia had reduced intraepidermal nerve-fibre density at different biopsy sites, compared with 10% of women with major depressive disorder and chronic pain, and 18% of healthy controls.

Participants with FMS and both proximal and distal reduction of intraepidermal nerve-fibre density showed significantly higher disease burden than those with fibromyalgia but normal skin innervation.

‘We show widespread small nerve fiber dysfunction and damage in FMS patients and provide first evidence that a more severe phenotype is associated with more extensive skin denervation; disease controls with MD-P [major depression and chronic pain] did not differ from healthy controls,’ they wrote.

Commenting, rheumatologist Dr Emma Guymer said the findings added to growing evidence that some people with fibromyalgia had alterations in their peripheral small nerve-fibre function, physiology and morphology.

‘It would be interesting to investigate if those fibromyalgia sufferers who have documented peripheral neuropathic changes respond to therapies targeting such processes,’ said Dr Guymer, Head of the Fibromyalgia Clinic at Monash Medical Centre, Melbourne.

However, she said that although the changes in small-fibre peripheral nerves in some patients with fibromyalgia were interesting, the data did not necessarily clarify whether they were a cause of symptoms, or occurred as a result of the more general fibromyalgia pathology.